Blessing and Call: Learning from our Hudson River

March 14, 2022 marks the 25th Anniversary of the International Day of Action for Rivers. At a meeting of Sisters of Charity of New York in January, 2003, Sr. Theresa Capria offered reflections on the community’s life and future, based on her “learnings from the river at our front door, the majestic Hudson named by our […]
Comments (2)


March 14, 2022 marks the 25th Anniversary of the International Day of Action for Rivers.

At a meeting of Sisters of Charity of New York in January, 2003, Sr. Theresa Capria offered reflections on the community’s life and future, based on her “learnings from the river at our front door, the majestic Hudson named by our Indian forbears as the ‘water that flows two ways’.” She invited listeners to “temporarily put aside our many concerns, to lay them at the river’s edge and to ask the Spirit of God to descend upon us.”

Sr. Theresa’s poetic and prophetic words, excerpted from her talk of almost twenty years ago, seem especially relevant as we deepen our awareness of the gift of the world’s rivers.

“…Mount Saint Vincent has stood tall on the banks of the Hudson River which stretches 315 miles from Lake Tear of the Clouds in the Adirondacks to the Battery at the tip of Manhattan. As we have learned more about the River in recent years we have come to realize that our lives bear similarities to the ebb and flow of the tides of this great and remarkable body of water.

“The river has two high tides and two low tides within every 24 hours. Tides are the result of the interaction of variations in gravitational attraction of the earth, sun and moon. The river could not do it alone…What are the tides in our lives? When have we moved with the tide? And when have we gone against it? When has it been impossible to know which direction we had taken or should take? Can we allow the tides to teach us something about dying and rising, about diminishment and transformation, about blessing and call?

“The southern part of the Hudson stretching 153 miles from Troy to New York Harbor is an estuary with the fresh water flowing down and the strong push of the salt water from the ocean flowing up. The resulting muddy waters are not clear, but life is teeming underneath.  Estuaries are among the most productive of earth’s ecosystems and are crucially important to all life, including human. We are part of that ecosystem. In what ways have the Sisters of Charity and Associates been productive in the past four years?…

“On a more hopeful note, the destructive forces of the last two centuries are being turned around, at least in the Hudson River. Our river is experiencing new life due to the efforts of many concerned citizens. Is it just by accident that we and other religious congregations are on the banks of this River? In what ways are we experiencing new life? How can we nourish these new signs of life? Do we believe with Vincent that “Love is inventive even to infinity’? What is the blessing? What is the call?

“Against these images from our river we can highlight our own currents, our own flow of events, our own turbulence underneath generating new life, influenced as they all are by the tides of events beyond our control…[for example,] the tragic events of September 11, 2001, the scandal in our Church, and the threat of nuclear war,…the growing number of people especially women and children, living in poverty…,the escalation of violence all over the world…The murder of our sister, Barbara Ann Ford, brought that reality into our lives in a way we can never forget.

The turbulence is not all outside. Our internal tides flow in more than one direction. We have conflicting ideas about the present and the future. Pain and hurt from long ago as well as current feelings of alienation and misunderstanding still trouble us. We fail to see the new life being created by the turbulence. What is the blessing? What is the call?

At the same time we have celebrated life… [Sr. Theresa mentioned: the 2000 Homecoming for former members; the Bridgebuilding Program for younger generations; the Theology Update Program; 25th anniversary of Associate Relationship program; celebration of priests; ecumenical service for the 25th anniversary of Mother Seton’s canonization; growing number of shareholders in Sisters Hill Farm; anniversary celebrations for Our Lady of Angels School (75th), Sts. Peter and Paul School (90th), St. Vincent’s Medical Center, Manhattan (150th) and St. Vincent’s, Staten Island (100th); construction began on Seton Village, Nanuet; new initiatives in Guatemala and Nassau; steps taken to address issues of diversity and multiculturalism; women joining the Congregation]. What is the blessing?  What is the call?

Centuries ago Shakespeare used the same image in his play Julius Caesar.

“There is a tide in the affairs of [humans],

Which, taken at the flood, leads on to fortune;

Omitted, all the voyage of their life

Is bound in shallows and in miseries.

On such a full sea are we now afloat,

And we must take the current when it serves

Or lose our ventures.”

We are at such a moment in our history.  Perhaps our river which flows in two directions at the same time is trying to teach us that the time has come to move from an either/or mentality to a both/and approach to life, to a partnership which honors both creative imagination and sound reason.  Hopefully, the successes as well as the failures of the past four years have set the stage for a new moment as we “take the current” and steer our ship into rough waters, beyond which is a new and transformed reality. 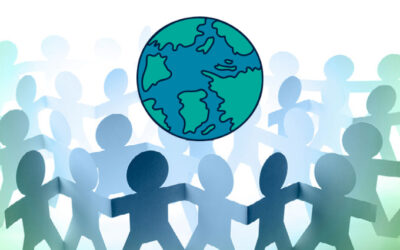 Some thoughts on Advocacy and Laudato Si’

By Sr. Carol De Angelo Earth Day 2022 is Friday, April 22, 2022. For me, advocacy work is about collaboration and building and strengthening mutually enhancing relationships. Advocacy work is accompanying others, as brothers and sisters, human and nonhuman, on the...